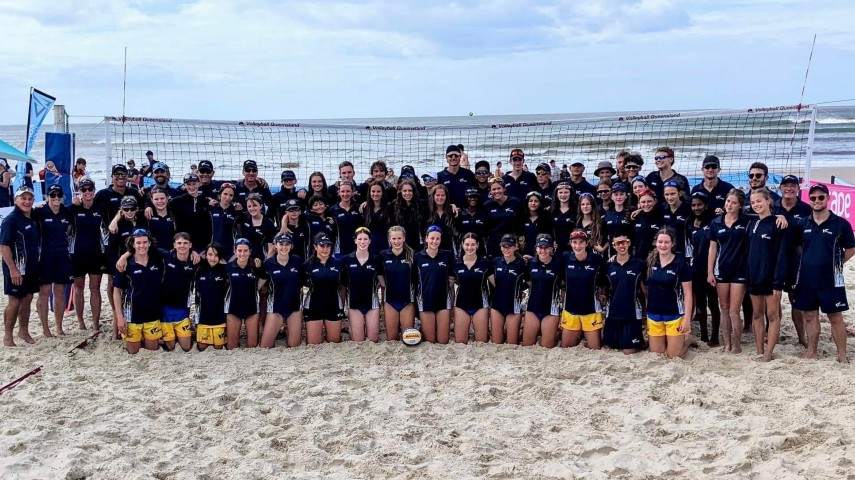 Victoria won 1 Gold, 1 Silver and 3 Bronze Medals finishing third overall in the race for the Andy Burdin Shield, awarded to the best performing state/territory during the event.

2021 Gold Medallists Ben Carroll and Mitchell Croft unfortunately missed out on the opportunity to defend their medal in U18’s after losing in a playoff to New Zealand.  This meant their Bronze Medal match was now a Silver Medal match and they were grateful to win despite the disappointment of missing out on Gold.

In U18 Girls, long-time State athlete Luella Greer paired with Cat Smith to win the Bronze Medal, Luella’s first Australian Beach medal after many years representing Victoria. Bronze Medals were also won by the U15 Girls of Jess Turner, Ellie-May Jury, Ruby Smith and Madera Famous as well as in the U14 Girls of Sophie Kay, Ella McDonell, Shalomi Samuel and Rosie O’Brien.

Volleyball Victoria would like to thank all athletes involved in this years’ program – trials through to championships, all coaches and officials who have represented their state and to the families and sponsors who ensure that we can continue to develop Australia’s next generation of Beach Volleyball stars.  It has been yet another challenging program with COVID-19 now a reality among our sport and while it posed a risk of team and athlete withdrawals, we were grateful to have our full delegation compete without hiccup.

Thank you to all outgoing athletes for your time and dedication to our sport over your respective journeys.  We hope to see you all continue your beach volleyball in coming years and hope that you enjoyed the experience.

We also would like to thank Volleyball Australia for hosting the AYBVC and look forward to returning to Coolangatta, QLD for the next three years.

As well as all Victorian coaches who volunteered their time this summer and at AYBVC and lastly, to the parents who make this all possible.

Congratulations to all involved and we look forward to celebrating with you at the combined 2021 and 2022 Beach Blue and White Jacket Dinner when we can hopefully celebrate your achievements.